When Aging Parents Worry About Being a 'Burden'

Is your parent withholding important information about their health from you? 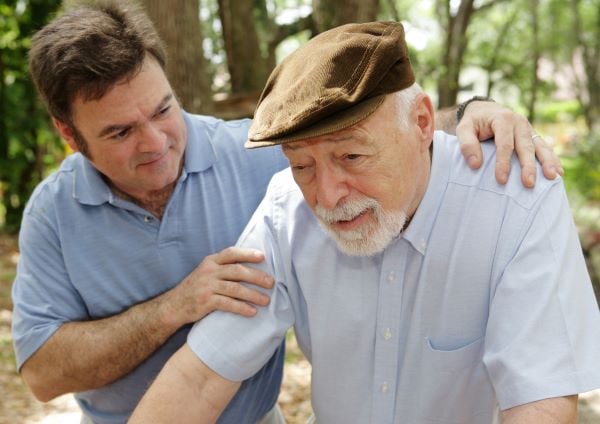 No matter your age, it’s not easy asking for help with things you were once capable of handling and managing yourself. If you’ve ever broken a bone, or spent time in the hospital recuperating, you might be able to relate to the inner struggle an aging parent has when faced with the need to have help from adult children they once were responsible for raising. The fear of “bothering” loved ones or “being a burden” can leave you feeling like you’re in the dark when a crisis strikes.

Why Parents Fear Being a Burden

Nearly 50 percent of aging parents say they’re worried about being a burden to their children. In fact, author Michele Hanson felt so strongly about it, she wrote, “Parents are meant to help and support their children, not become an intolerable burden upon them, especially when they’re struggling.” In an article she wrote in 2016, she spoke of becoming “increasingly frightened of growing older”. Does your parent feel the same way? Are they withholding information from you for fear of becoming a burden? Here are the three most common reasons parents hold back when it comes to be honest about needing more help.

Remember the quiet car ride to your mom’s last doctor’s appointment? Or, how quickly your dad changed the subject once you asked him how his doctor’s appointment went? Most aging parents would prefer not to bother their kids with their health problems. Maybe your mom feels guilty  every time you leave work to take her to a doctor appointment or your dad notices that you’re overloaded with to-dos when you stop by his house for your weekly dinner. The end result? They give priority to your family and job instead of asking for your help.

Your parents are still your parents after all. They worry about you and your own health and happiness — and they don’t want to burden you with their problems when you have a complicated life of your own.

2. They’re afraid that by asking for help they’re losing control

Have you ever taken it upon yourself to re-organize your parent’s pantry when all they asked you to do was put a box of cereal away? Or, did you clean out the fridge the last time you were there for dinner? Your parent might be afraid that asking for too much help might mean you’ll “take over”.

No one is more aware of the physical and mental changes their body is undergoing than your own parent, and she might just worry that she is becoming too dependent on others. This can be frustrating and your parent might just feel guilty they can’t do it all alone. It’s hard to maintain a sense of dignity and independence when she can’t just take care of things herself. So instead of asking for help, she tries to figure it out herself.

3. They're concerned that you'll worry too much

Aging parents are also concerned that if they do tell you about a health care issue, you’ll worry too much. Maybe your dad needs to start taking a daily blood pressure medication, but he’s worried if he tells you that then you’ll stop by every day to make sure he’s taking his medications.

He knows you’re just interested in his well-being, but he doesn’t want to be parented by his children. It’s not that big of a deal, and there’s nothing you can do about it and he feels like he can figure it out himself.

What You Should Look For

There’s definitely a necessary balance between respecting your parent’s right to privacy, and encouraging them to share information that’s important for you to know so an emergency can be avoided, especially when it comes to important information about their health, safety or general well-being.

While your parent might not be forthcoming with information, there are a few things you can look for. Some aging parents cover up bruises, don’t tell anyone about falls or accidents, and downplay money troubles in hopes that they can continue living on their own without asking for help or worrying their kids.

But if your parent keeps secrets because they don’t want to be a burden, they can end up putting themselves in danger and increasing the likelihood that they will have to rely on others to care for them.

Another common conversation aging parents typically avoid is their driving. Maybe your dad didn’t tell you about finding his keys in the freezer or getting lost on his drive home from church to keep you from worrying he’s losing his memory. Or, maybe he’s more worried that if he tells you, his driving days will come to an end.

It can be incredibly frustrating to want to help your aging parent as they helped you when you were younger only to be told that they’re fine on their own.

How to Handle A Secretive Parent

“The first step is opening up the line of communication with Mom or Dad by asking them how they would like to age, where they want to be, and so on,” says Amelia Adkins, Senior Director of Marketing for Highgate Senior Living. “This empowers them to talk about their feelings and allows you to work with them to make a plan to help them maintain their independence while also ensuring their safety and quality of life.”

Beginning candid conversations about aging can be awkward, but here are some possible starting points:

A listening ear and a little time can go a long way in allowing your parent to accept help. Put yourself in their shoes, and let them know you care about how they feel and what they want. Let them talk and really listen.

Share with them that to be human is to be a burden at times no matter your age. They once joyfully bore the burden of child care. Now, caring for them is something you want to do, too. You see it as a privilege — a way of saying thank you for all your parent has done for you.

Talk with your parent about what, in their minds, would justify hiring home care or moving to an assisted living community, for example. Try to elicit from them how they view these forms of assistance and what they mean to them.

These discussions likely won’t be resolved in one sitting. Be patient and understanding. Aging is frightening. It’s no wonder that your parent is resistant. But if you can figure out what the underlying issues are, you can start to find good ways forward. And by making these important decisions together and planning ahead, you can help make sure your parent can age on their own terms.

For advice from aging parents themselves, download our eBook What Older Parents Really Want from Their Adult Children.