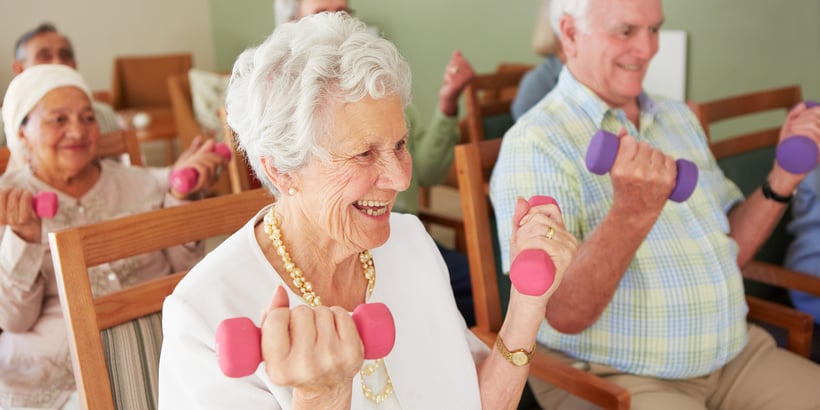 Someone recently asked Gayle why she lives at Highgate at Yakima if she’s independent. Her response?

Are You Really Independent at Home?

For many older adults, moving to assisted living is synonymous with losing their independence. They’re worried that they’ll be giving up self-reliance, freedom, and personal space.

Although it seems counterintuitive, many people actually find that they have more independence and freedom in assisted living than they did living at home. Sometimes dependence on outside help can be so gradual that they might not even notice small ways they’ve already given up pieces of freedom while living at home.

For example, in order for many older adults to live at home, they need regular help from family, friends, or home care aides. Perhaps they don’t drive anymore and are at the mercy of someone else’s schedule when they need to go to the doctor or to the grocery store. Or maybe they only shower when they have a helping hand and rely on fast food restaurants to make dinner most nights.

“Before I lost my license because of my eyes, I was pretty active,” says Jerry, a resident at Highgate a Great Falls. “I used to go to Masonic meetings and Scottish Rite meetings. I used to go to coffee get-togethers. I was free to do whatever I wanted.” After he entered driving retirement, he spent most of his days sitting at home alone. “I didn’t do anything until the kids took me places. They tried to keep me as busy as possible, but most of the time, I was just sitting there.”

In other cases, for seniors to live safely at home, their families might have to do things that take away their feelings of autonomy, such as help with bathing or grooming. It can be frustrating to ask for help with things you were once capable of handling and managing yourself, and aging loved ones might just feel guilty that they can’t do it all alone.

Out of fear of being a burden, they don’t ask for help. If an aging loved one keeps secrets because they don’t want to be a burden, they can end up putting themselves in danger and increasing the likelihood that they will have to rely on others to care for them.

Take Emmett, who didn’t want to use a pill reminder because he felt it was demeaning for his wife, Bonnie, but Emmett often forgot the medication schedule as well. “We ended up in the ER one night,” says their daughter Bev. “Between the two of them, a lot of pills were not getting taken or were getting double taken. It was really scary. I felt like I had to accept the possibility that something tragic might happen. I felt helpless. Totally helpless.”

Assisted Living Can Set You Free

The best assisted living communities provide a safe and healthy living place that meets seniors’ needs — including the need for independence.

For example, many communities coordinate transportation to shopping centers, religious services, outings, and many other daily activities, even on short notice. These communities understand that transportation enables residents to live more independently and ensures that older adults will be able to continue enjoying the activities they’re accustomed to.

Just because you’ve moved to an assisted living community doesn’t mean you have to completely change the way you live. Living at Highgate has actually allowed Jerry to get back to his active lifestyle. Now that he has access to transportation services through Highgate, he gets together with his old buddies at a local coffee shop every Tuesday and plays the accordion at the senior center every Wednesday.

Independence also means that residents have time to enjoy interests without the worry of housework, home maintenance, and yard work. Another example: When Gayle first moved into the assisted living community, she needed a lot of assistance. Care partners helped with every activity of daily living: showering, dressing, using the restroom, getting in and out of bed. “She didn’t feel safe enough not having somebody there,” says Mandy Ketcham, Community Relations Coordinator at Highgate at Yakima.

She had a hard time in the kitchen, too. The microwave was too high, and her arthritis pain made it so she couldn’t comfortably use the knob controls for adjusting the cooking time and power settings. Highgate gave her a microwave with push buttons instead of turn knobs and set it on the countertop so she could reach it, but recently, Gayle has been gaining her independence back.

“She said she doesn’t need the microwave anymore because she can actually turn the knob. And now we only help with dressing and grooming and showers twice a week. That’s it. She’s become more independent.”

Ketcham attributes this to the newfound purpose in Gayle’s life. She exercises, visits with other residents, reads the paper, goes for strolls, and welcomes new residents — all activities that may seem like everyday activities to some, but are difficult when living a life of isolation and chronic pain. “When she was at home, she wasn’t going outside. She couldn’t. She didn’t have enough energy. The pain was too much,” Ketcham says.

“By being here and making sure her pain is under control, her personality is coming out. Meals are her social hour. She really enjoys it. She’ll come down early and walk through the dining room and stop at each table and say hi to everybody. She told me that she was walking out of the dining room after lunch the other day with some friends and they were all giggling and having a good time. She turned to the ladies and said: ‘I never thought I could have this again.’”

Another benefit of assisted living is that it means older adults can actually enjoy spending time with their family and friends instead of depending on them for care. Yet if the unexpected happens, there is care right on-site.

For many years, Betsy lived in a beautiful high-rise apartment in downtown Vancouver, Washington. She loved living there, but after a period of time, she started isolating herself. Sometimes, she would go days without getting dressed.

With Betsy’s permission, her children started looking at senior living communities. “I was looking forward to getting to know people again,” Betsy says. I missed not having people around.”

Since moving to Highgate at Vancouver, Betsy’s life is back to normal again, says Community Relations Coordinator Rose Zamudio-Mora. “Since she was isolated, her decline came on a lot faster,” Zamudio-Mora says. “Now that she’s in assisted living, she’s back to being much more independent. She gets dressed and comes to meals on her own. She comes to exercise on her own. When she got that routine back, she started flourishing. You saw her getting herself fit and her personality started to come out again.”

Want to hear from more Highgate residents about how assisted living helped them maintain their independence? Read our eBook Hope & Happiness, where Highgate residents, some of their family members, and a few Highgate team members share stories about life before Highgate and how moving into a community setting changed their lives for the better.