7 Things I Learned While Moving My Dad into Assisted Living

One adult daughter’s lessons learned, based on true stories from Highgate residents and their families 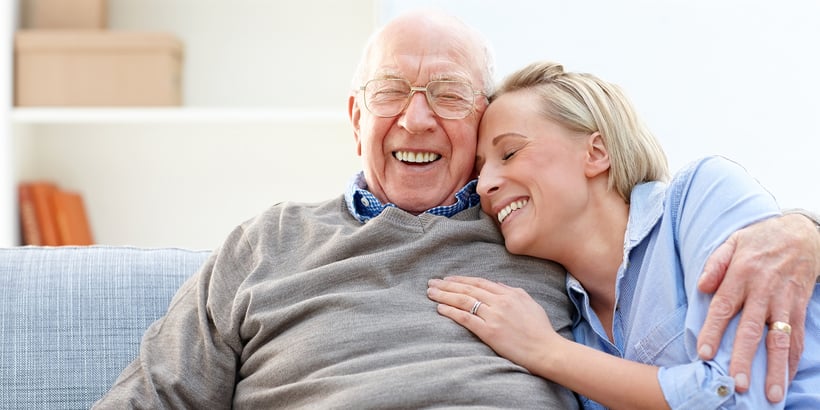 You know the saying, “You don’t know until you know”? That’s how watching my dad age, stepping into the caregiver role, and figuring out his living situation felt.

The only reason I made it through was because I had help from my sister and a ​​close childhood friend who worked as a nurse in senior living and found some helpful resources online.

To save you from making the same mistakes I made, I thought I’d share some insights I gained on my caregiving journey and my Dad’s move to senior living.

Dad had always been the man of the house. He still is. Only now, the house is empty. At first, things were fine, but over time that changed.

I missed the subtle changes — like the fact that he had gotten to the point where showers were far and few between. Or that the late fees were adding up every time he forgot to pay the bills.

When he stopped driving, things went downhill fast. My outgoing, witty, fun-loving dad now spent most of his days alone, moving from the bed to the couch to the chair and back to the bed again, and his mood began to change. Reliant on others in a whole new way, he didn’t like it. His patience grew thin, and so did mine.

My sister and I were worried about my dad, so naturally, we had a lot of questions: What did you have for dinner? Did you take your medicine? Have you been grocery shopping?

Just as naturally, our father didn’t like that. One day I remember in particular asking him how his test results were after seeing his doctor and he responded: “If there’s something I need to tell you, I will. You don’t need to babysit me, Rachel.”

Eventually, I quit asking questions — mostly because the fighting over every little thing was exhausting, but it didn’t change how worried I had become about him. I was worried about his safety. I was worried that the happy-go-lucky father I had been raised by no longer existed. He needed me. He needed my help, but I needed to set some healthy boundaries.

Yes, Dad was getting older and needed more help, but he was still an adult and wanted to be treated like one.

One day he was grateful for my help, and another completely frustrated with a simple suggestion to use a pillbox. It seemed like his criticism and moodiness kept growing as the days went by. There was this imaginary line between what Dad felt was me caring, or me trying to be what he felt was controlling. It got to the point where we were always getting under each other’s skin.

I lived every day feeling guilty. Working a full-time job plus helping Dad was wearing on me, and I couldn’t keep up.

4. Dad Needs to be in the Driver’s Seat

As the head of the household for so many years, Dad was conditioned to be strong, in control, and independent. Accepting help from me, his “baby girl,” made him feel dependent and, quite honestly, worthless at times.

The moment where things really seemed to change was the day I realized Dad needed to feel like he was in the driver’s seat. This time, I asked for his help.

I don’t remember exactly what I said, but it was something like: “Dad, I need your help with something. I am putting together a checklist in the event something happens to me and realized there are some things we’ve never talked about. I know this is hard to talk about, but I can’t stomach the thought of something happening to me and you not having the support you need.”

It wasn’t an easy conversation. At first, he just shook his head in disbelief that I would even bring something like this up. Eventually, he opened up little by little. That one conversation changed everything. I was so afraid to have it, but looking back, it was the turning point in our relationship.

Considering that most of my dad’s friends wanted to stay in their homes as they got older, I wasn’t surprised that bringing up assisted living put him a bit on the defensive.

It helped that I had done my research and was able to address many of his questions and concerns. I made some calls and was able to share some brochures to show Dad just how different it was from what he was envisioning. On one visit, I brought along my iPad and we looked at the websites of some communities that were close by. I also visited a couple communities myself first to narrow down our options before bringing my dad along.

Whenever I see articles about the “assisted living talk,” I always chuckle. My dad and I must have had a dozen conversations about assisted living before he even agreed to go on his first tour — and then we spent a couple months touring a few different places.

I had to keep reminding myself that it wasn’t just my decision to make. As much as I could, I focused our conversations on what Dad wanted and needed and always brought our conversation back to how much more like “normal” his life might feel if he was around more people his own age. It was a process — and not a short one.

We spent a lot of time visiting and making return visits at different times of day to scope out daily life, the staff, accommodations, activities, and dining options. Dad became more comfortable there with each visit.

I was shocked when he said that, though staying home was the most comfortable thing to do, he was starting to see how assisted living might be better. “There, I wouldn’t have to be alone,” he said.

7. Assisted Living Gave Me My Dad Back

We’re a few months in now, and Dad says he wishes he would have made the move sooner. His biggest fears about moving aren’t even thoughts in his mind anymore.

He loves the Wii Sports events like simulated bowling, baseball, and tennis, and it always seems like he’s going somewhere new that he can’t wait to tell me about. Last week he and a few of the other guys from mens’ club went to the golf course to practice putting, and the week before, they had taken a fishing trip — something he hadn’t done in 20 or more years. He’s become a regular at the Texas hold ’em events they have and is quite competitive when it comes to playing lawn games like bean bags and bocce ball.

I am amazed at how much better his mood is. It has been life-changing to be surrounded again by others his age. Sometimes I can’t even get him on the phone when I call because he’s too busy! Each evening at dinner, Dad sits at his usual table, in the same seat with three of the original friends he made when we first visited the community.

Turns out assisted living has helped keep my dad healthy, happy, and active longer, and I’ve finally been able to shed the guilt that I’ve been carrying around for so long. There’s a new sense of peace in knowing Dad is content, safe, and well cared for. I still visit several times a week, and we make those visits count — just me and Dad.

Moving to a senior living community is a big step for all aging adults, but it can be particularly difficult for elderly men.

To read more about how one adult daughter knew it was time for assisted living and how she worked through her father’s assisted living objections, download our eBook Moving Dad, based on true stories from Highgate residents and their families.