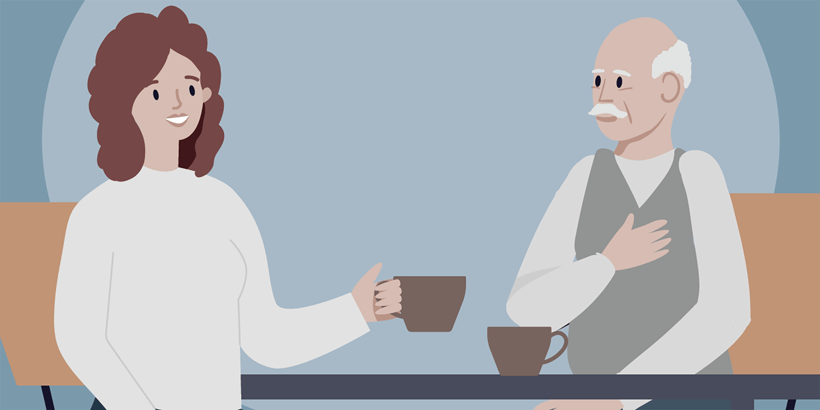 The writing was on the wall: Dad wasn’t going to be able to keep living at home alone, or things were going to get a lot worse.

I was lucky enough to have a close childhood friend who had become a nurse and had 20-years working in senior living communities.

“It’s not at all what you think it is, Rach,” I remember her telling me.

I had always envisioned tiny rooms, no privacy, and school-cafeteria-quality food. Who on earth would send a parent to one of those places?

“Rachel, seriously, you know how much of a social butterfly your dad is. Why do you think he seems so crabby and doesn’t feel like showering anymore?”

I found a way to start the discussion around moving to assisted living. I focused on things he had been sharing with me over the past couple of weeks — how he wasn’t sleeping at night, how lonely it was in between my visits, how frustrated he was that he had become so dependent on me for help. I reassured him that we didn’t have to decide anything today, or ever if that was the decision we came to, and he agreed to keep an open mind.

Boy, did Dad have a lot to say. Considering that most of my dad’s friends wanted to stay in their homes as they got older, I wasn’t surprised that bringing up assisted living put him a bit on the defensive.

His desire to remain self-sufficient, coupled with his denial that he needed some help with care, really prevented him from seeing it as a good option for quite some time. The open-minded attitude he had promised me he would have wasn’t always there.

I had to keep reminding myself that it wasn’t just my decision to make. As much as I could, I focused our conversations on what Dad wanted and needed and always brought our conversation back to how much more like “normal” his life might feel if he was around more people his own age.

It was a process — and not a short one. Through our many conversations, Dad had every excuse you can think of.

“I’m not moving to a nursing home.”

At first, when I’d talk about assisted living, my dad would immediately think “nursing home.” I knew he was picturing a small room, most likely shared with someone else, no privacy, and only a few choice belongings that he could bring with him.

We spent quite a bit of time talking about the differences between assisted living and nursing homes. Fortunately, one of Dad’s friends had recently moved to an assisted living community across town, and his daughter was extremely helpful in pointing me in the right direction for helpful resources because she had just gone through the same process I was going through with my dad.

I made some calls and was able to share some brochures to show Dad just how different it was from what he was envisioning. On one visit, I brought along my iPad and we looked at the websites of some communities that were close by. Dad replied with, “I don’t need anything fancy,” to which I giggled a little thinking how different this conversation would have gone if Mom were still around.

The pictures from the brochures and the websites were helpful, but I wanted to see if these communities were as impressive in person as they were in the photos. Knowing that Dad wasn’t quite ready to go visit communities yet, and that if I could speak to it firsthand I might get a little further with him anyways, I decided to visit a couple communities myself.

I wanted Dad to see for himself that assisted living offered opportunities for a new chapter in life. I thought that seeing how other people had acclimated might make it easier for him to see himself there, too. There’s no substitute for actually walking the spaces, peeking in the dining room, sitting in on a book club, or watching part of a fitness class, and getting that firsthand look and feel.

Not only was Dad in serious denial about how much help he needed with day-to-day activities, I don’t think he even realized how much independence he’d actually given up by staying at home. I was in uncharted territory, and the last thing I wanted to do was say the wrong thing. I told Dad I understood where he was coming from, and we tabled the conversation for that day.

That night, I decided to turn to Google and found an article that talked about the benefits of proactively searching for the right assisted living community. This fit my dad’s situation perfectly. I wanted nothing more than for him to move to a community while he was still active and fairly independent, so he would have time to be able to be involved in things. I wanted him to be able to choose what activities he wanted to go to or where he went to the doctor. One thing was clear: If we started looking before he felt “ready,” we could take our time exploring all the options and be certain that we could find the right community.

I shared my thoughts with Dad the next day and reinforced, “The decision is ultimately yours, but I think we should tour some communities to fully understand all your options even if you aren’t going to do this for quite some time.”

We spent a couple months touring a few different places. Some we liked; some we didn’t care for at all. One of the communities we visited helped him understand that assisted living is designed to offer more freedom than he’d had at home. He’d be able to live in an environment he didn’t need to rely on family or friends to maintain.

What he seemed most interested in was that he could eat meals prepared by a chef and that the community had an active bridge and cribbage club. I saw so many opportunities for Dad to embrace who he once was and envisioned him taking advantage of the outings to the theater or the monthly mens’ club breakfast outings.

Dad and I took home an activities calendar and while having coffee the next day, we browsed through activities like the mens’ coffee hour, a lecture that had been scheduled with a local writer, a scenic drive, and poker night.

Some of the people who made the biggest differences in Dad’s attitude throughout this whole process were the Community Relations Coordinator and a Resident Ambassador who had greeted us at the entrance on our first visit. My dad and Bob, the Resident Ambassador, hit it off right away — they were both veterans who grew up on farms — and I could see my dad starting to relax just by talking to him. We stayed for coffee hour and Dad was extended an invitation to happy hour the following week. It was the start of new friendships for Dad happening right before my eyes.

Over the next few weeks, we spent a lot of time visiting, making return visits at different times of day to scope out daily life, the staff, accommodations, activities, and dining options. Dad became more comfortable there with each visit.

“I can’t stand to leave my house.”

I was shocked when he said that, though staying home was the most comfortable thing to do, he was starting to see how assisted living might be better. “There, I wouldn’t have to be alone,” he said.

We still had the task of downsizing to handle. One of the hardest conversations to have with Dad was about leaving the home he and Mom had raised us all in. I knew the thought of leaving the place that they worked so hard for and that held decades of treasured memories was going to be hard for him. At times, I could tell Dad was thinking about what he might lose in the move, rather than what he’d gain.

I know he really misses Mom. At first, the topic of downsizing was impossible. He wanted to bring everything with him, and we both knew that wasn’t possible. Downsizing was a process in itself. We decided to chip away at it by picking one room at a time. He’d choose some of the most important things in that room that he wanted to bring with him to the community. Then we’d identify what my sister or I might like to have or hang on to for Dad, as we put it sometimes.

Whenever I see articles about the “assisted living talk,” I always chuckle. My dad and I must have had a dozen conversations about assisted living before he even agreed to go on his first tour. Each one was worth it.

Assisted living turned out to be the very best option for everyone involved, especially my dad.

Moving to a senior living community is a big step for all aging adults, but it can be particularly difficult for elderly men. To read more about how one adult daughter knew it was time for assisted living and how she navigated her changing relationship with her father, download our eBook Moving Dad, based on true stories from Highgate residents and their families.